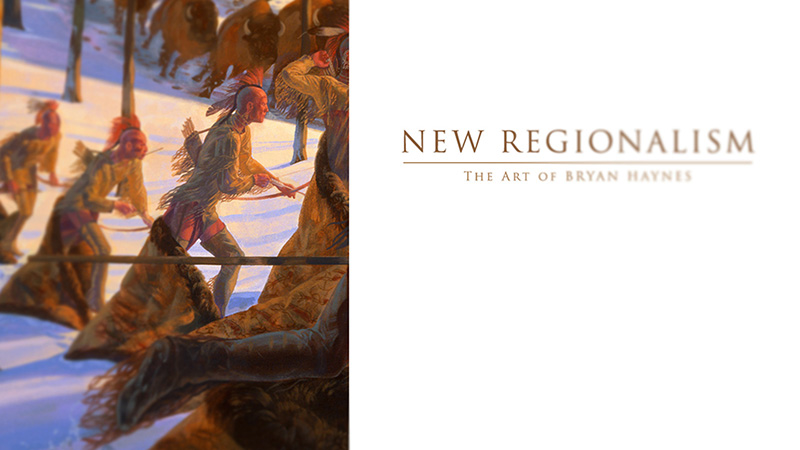 Historical figures, Native Americans and local characters inhabit the sweeping views of the New Regionalist paintings by Bryan Haynes. The crooks and hollows, bends and curves of the Missouri landscape seem to shape the artist’s inspirations – sculpted in current design.

How can one deconstruct this visceral reaction, break down the reasons why Bryan’s body of work is so appealing? Is it his brilliant use of color, his inherent understanding of light, the particular mix of homage and innovation in his style and subject matter? Is it nostalgia or is it a heightened sense of reality? Is it memories of the way things once were – or the way we wish they had been or might be in the future?” – Bob Moore, National Park Historian

REDISCOVERY OF THE LANDSCAPE 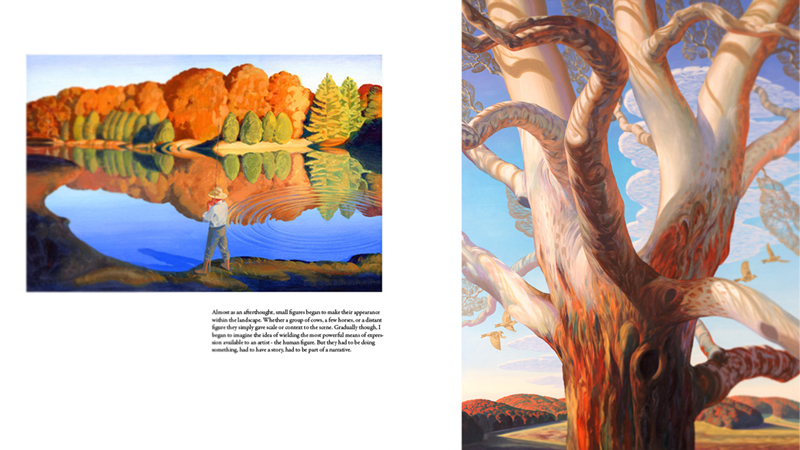 “Living among these hills my sketchbook began to fill with small postcard-sized sketches of possible landscape compositions. I drew bumps and hollows, lengthened shadows, or bent a tree to frame a scene – the organic shapes conforming to my underlying framework of expression. Using the tools of the commercial art trade learned over decades to create emotion and convey feeling, I began to realize that in order to capture the beauty and character of this region most accurately, my compositions required altering and exaggerating objects to convey specific emotions rather than copying a photographic reality.” – Bryan Haynes 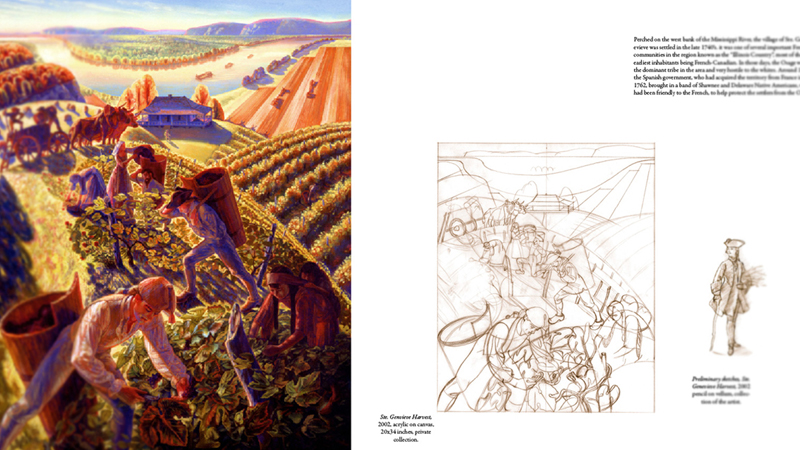 “We knew a man, not far from here, who cleared his land with mules. Neighbors knew to call on him to doctor their animals with his concoctions in glass mason jars. Many of those neighbors still live on the land their ancestors settled over a hundred and fifty years ago. Families long ago planted vinca, a ground cover of tiny blue flowers, around the graves of their loved ones. Just over the hill from our house, lies such a spot in the woods – the color giving the only clue to the graves of children taken one winter from the house that sits down below the view. Not far from there is the place where Osage braves killed a German immigrant for his big white horse. And, if you were to continue down along the railroad tracks, you would come upon Tavern Cave, a cave visited by Lewis and Clark on their way west and used for millennia as a shelter for travelers on the Missouri River. It is not uncommon to find arrowheads or spear points, on the banks of the river and its creeks, from people that were here thousands of years ago. Seemingly, the river attracts a migratory path of stories from the people passing through.” – Bryan Haynes

STORIES ON A LARGER SCALE 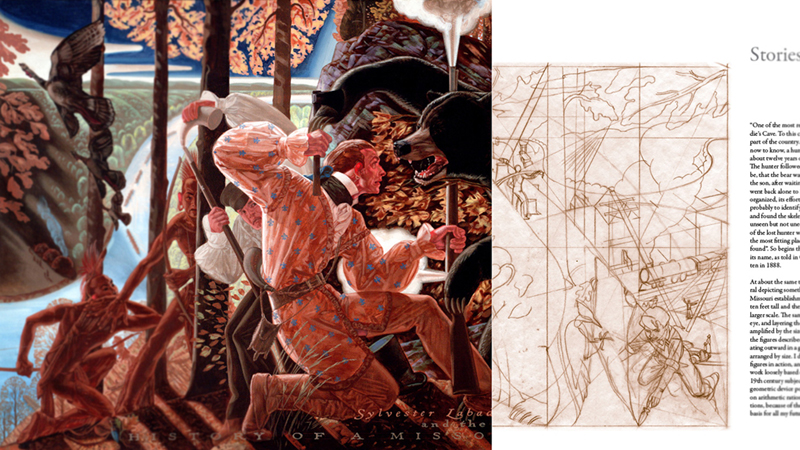 “The space demanded a piece twenty feet wide by ten feet tall and therefore offered the challenge of telling a story on a much larger scale. The same basic rules of dividing the space, directing the viewers eye, and layering the chronology of the stories applied – just geometrically amplified by the size. To tell the story in a visual series of “chapters” I placed the figures described in the legend front and center, with other stories radiating outward in a general chronology left to right, with their significance arranged by size. I developed numerous gesture drawings of various poses of figures in action, and began placing them in the “chapter” scenes on a framework loosely based on the Golden Section rectangle. In keeping with the 19th century subject of the mural, I harkened back to the Golden Section, a geometric device popular at the time that used Classical proportions based on arithmetic ratios thought to create “dynamic symmetries”. These proportions, because of their inherent balance and beauty – over time, became the basis for all my future mural compositions.” – Bryan Haynes